Working on beehives and doing inspections requires a hygiene strategy that works for you and keeps your bees disease free from any of your actions. We need to ensure that we are not spreading any disease, spores or parasites from one hive to another as we travel through the apiary inspecting our colonies.
0 Items 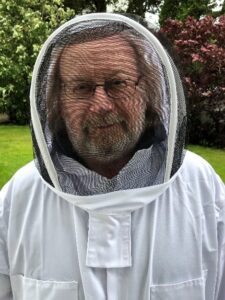 Working on beehives and doing inspections requires a hygiene strategy that works for you and keeps
your bees disease free from any of your actions. We need to ensure that we are not spreading any
disease, spores or parasites from one hive to another as we travel through the apiary inspecting our
colonies.

Chalk Brood
Chalk brood appears to be on the increase in Ireland and I hear many people saying they have seen
evidence of it in some of their hives.

Chalkbrood is a fungal disease called Ecosphere Apis that affects the gut of the bee larva. The fungus
starts in the gut of the larva and competes for the larva’s food causing the larva to starve. Once the
larva has died the fungus goes on to digest the rest of the larva covering it in a  white mould which
gives it a white “chalky” appearance which makes Chalkbrood easily identifiable.

Chalkbrood is most common in the spring and in damp weather. Other factors which may promote
Chalkbrood are inadequate nutrition and other diseases or conditions such as chilled brood or
colony stress. Some strains of bee are more resistant to Chalkbrood. Not using old combs may also
help.

We can spread chalk brood between colonies by not sterilising our gloves and hive tool between
hives and using the same bee brush in different hives.

Nosema
Nosema is a microsporidian under the classification of fungus that attacks the gut of the honeybee
and is one of the major threats to the honeybee population around the world.  Nosema is small (you
can fit about 300 spores in a pin head) and damages the gut wall of bees meaning they cannot
absorb nutrients, require more food and use protein to repair their own cells instead of feeding it to
larvae.

There are now two different types of Nosema affecting the European Honeybee: Nosema Apis and
Nosema ceranae. Nosema Apis has been found in hives since the beginning of the twentieth century
but Nosema ceranae was only discovered in the early 2000s. When N. ceranae was first found it was
thought to be very similar to N. Apis. As more research has been conducted and trials performed it
has become clear that the two Nosema species are very different.

We can spread Nosema between colonies by not sterilising our gloves and hive tool between hives
and using the same bee brush in different hives.

American Foul Brood
American foulbrood (AFB) is caused by a spore-forming bacterium called Paenibacillus larvae.
The purpose of the spores is to allow the bacterium to survive in the absence of the host.
The spores are highly resistant to extremes of temperature, chemical attack and other
adverse conditions that kill most bacteria. This means that it is difficult to eliminate the
bacterium from infected colonies. Spores can remain viable for many years on
contaminated equipment, and the bacterium will germinate and reproduce when it comes
back into contact with a honeybee larva.

Spores are accidentally fed to a larva by nurse bees in the form of contaminated brood
food. The bacteria kill the bee larva by completely consuming the body tissues. This occurs
only after the cell has been sealed.

European Foul Brood
European foulbrood (EFB) is caused by the bacterium Melissococcus plutonius. This is not a spore forming
bacterium. Like AFB, the bacterium is accidentally fed to a larva by nurse bees in the form of
contaminated brood food. It multiplies in the mid-gut and causes the bee larva to starve to
death by competing for its food. This normally occurs shortly before their cells are due to
be sealed. The bacterium remains in the gut and does not invade the body tissues of the
larva.

Symptoms of this disease are most commonly seen when there is a shortage of nectar,
pollen or supplementary feed for bees. Other stress factors such as infestation with Varroa
mites (which can be controlled) may also lead to an increase in symptoms.

We can spread Foulbrood between colonies by not sterilising our gloves and hive tool between hives
and using the same bee brush in different hives.

Hygiene Strategy & Frame Contactors
Anything that come into contact with frames or bees should be sterilised where possible between
hives.

You should carry a sterilising solution with you to sanitise your gloves and Hive Tool before entering
a hive. If you use a bee brush it can not be sterilised. Bee brushes are relatively cheap, so the ideal
scenario is to keep a bee brush under the roof of each beehive so that it does not come into contact
with any other bees than the bees in that colony

Taking this approach will ensure that you do not spread disease unintentionally between your bee
colonies.

To be successful we all need to learn, learn and learn more. We need to put in the time and effort but above all else we need to thoroughly ENJOY IT!